California's Proposition 13 could spur innovative public schools and save lives 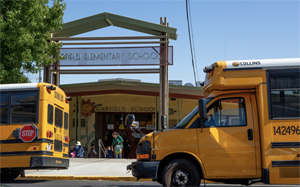 This Op-Ed was originally published as Guest Commentary in CalMatters on February 26, 2020

A quiet revolution may stir California educators to build novel forms of schooling, from preschool centers to career academies, even to boost the quality of charter schools. Or taxpayers may end-up financing cookie-cutter campuses that fail to inspire kids and teachers.

Much depends on voter approval of Proposition 13 on the March 3 ballot, and its fresh priorities expressed by state leaders. The bond measure would raise $15 billion in bond revenues to renovate and expand public schools and colleges. Few question that our educational facilities, like a home in disrepair, are showing their age, forcing students to attend crumbling, unsafe, even sinking campuses.

Educators sent pupils home from over 2,200 schools last year after light fixtures fell from ceilings and the stench of sewage bubbled-up in bathrooms. Wide-eyed children watched a sinkhole open-up after a water main ruptured beneath one San Francisco middle school. Two-thirds of our schools were erected more than a quarter-century ago, with one in 10 nearly a century old.

Less noticed, Gov. Gavin Newsom is nudging local school boards to rethink and build inventive forms of schooling. He has promised to move Proposition 13 funds to districts that renovate old classrooms to serve preschool-age children. This is beyond nearly $700 million already slated for pre-k and kinder facilities under a proposal by Assemblymen Kevin McCarty of Sacramento and Phil Ting of San Francisco.

One charter school, Summit Rainier in San Jose, will close this year, unable to secure funding for a permanent facility. The cost of real estate and construction became untenable. Proposition 13 would ease these pressures and shrink the $3.5 billion backlog of designed charter facilities already faced by state construction officials.

California’s vitality depends on world-class universities, advancing discoveries in medicine, engineering, and digital technology. But the state’s competitive edge could collapse, quite literally, given century-old labs and rickety facilities that dot college campuses.

Almost 600 buildings have been deemed as “a serious or severe risk to life” by government inspectors when the next temblor hits.

The ballot measure sets aside another $500 million for career academies, offering rigorous academics and on-the-job experience. Magnet schools preparing high schoolers for the health professions remain oversubscribed in L.A. At the Port of Long Beach, the Academy of Global Logistics readies teens for a variety of information-age jobs. Fresh dollars for facilities could expand these types of pro-employment efforts.

Proposition 13 would move California beyond one-size-fits-all schools. It aims instead to finance inventive campuses to lift achievement, cradle to career, fostering the skills required of the state’s robust job market. This challenges the expedient interests of builders, who seek higher profits by plopping down big, conventional schools. But we know that smaller and inventive facilities, as pursued by L.A. Unified over the past generation, can boost teacher morale and raise children’s achievement.

A lot will rest on how Proposition 13 revenue is allocated by the State Allocation Board.

The ballot measure would give a bit higher priority to districts with less property wealth and less able to tax themselves to pay for local bonds. Lawmakers could sharpen the targeting of targeting facilities dollars on less affluent parts of the state, including wider access to pre-kindergarten or quality vocational programs, as Gov. Newsom suggested last month.

California’s robust economy has long been founded on sturdy public works, along with the pursuit of pursuing equal opportunity for all children. Quality schools and colleges remain essential pieces of this shared infrastructure.  The new Proposition 13 offers a chance to reinvigorate educational facilities and fund innovative schools ­– to invest in our long-term prospects, together.